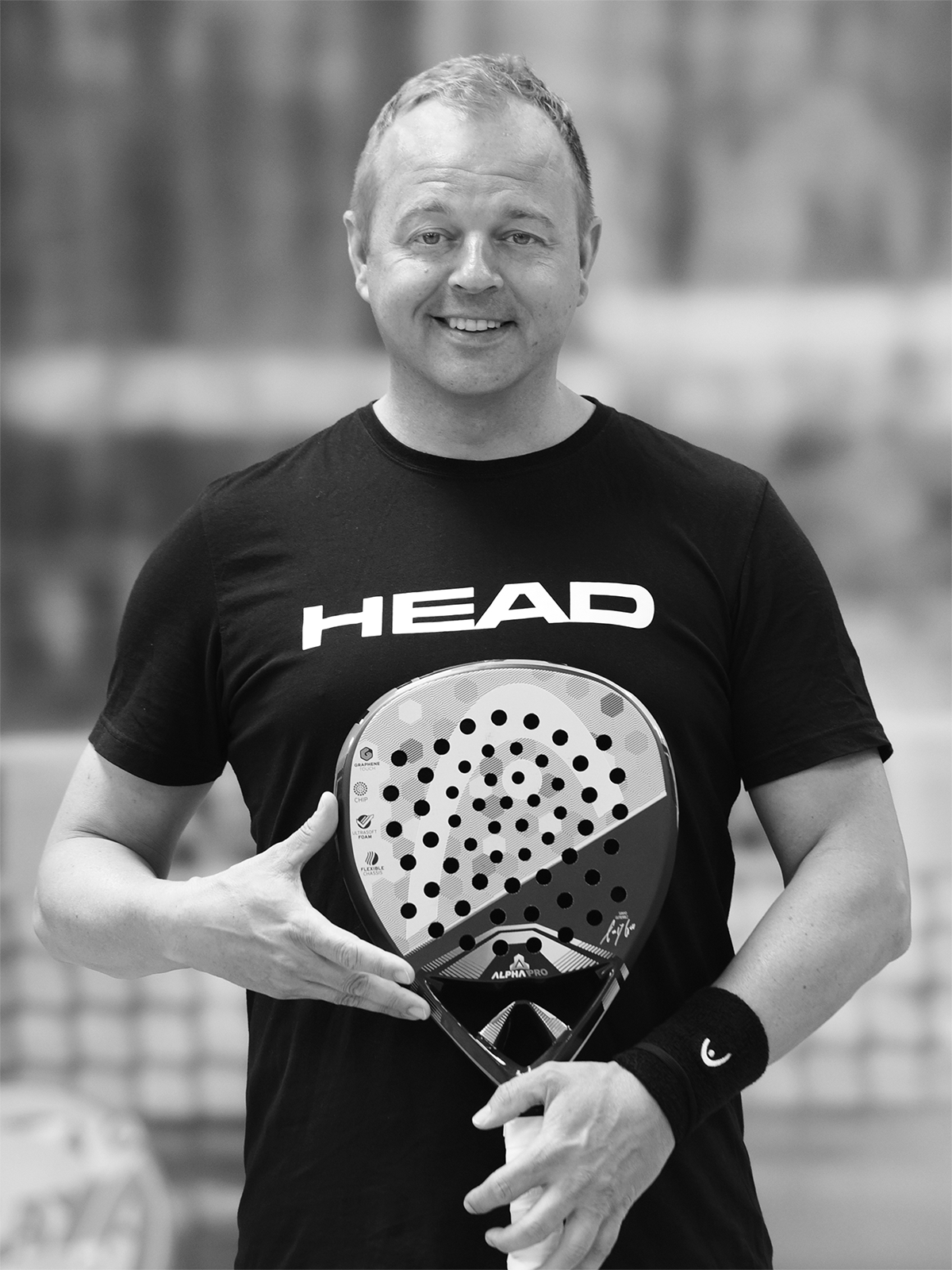 In 2015 Alex started de Academy with Marcel. With an educational knowledge in tennis for over 25 years, Alex has been in this world of tennis for a long time. Travel and education in Spain, Sweden, Germany and Belgium. Alex is mainly involved in the training for new padelcoaches. Alex tries to play padel 4 or 5 times a week and he wants to try to connect people with this amazing new sport. He wants to connect with other people who also want to make padel bigger and more successful.

After 20 years of tennis, the flame was fairly extinguished. After the competition and all the fun tournaments, it was enough. No more training and ultimately no tennis at all. All of a sudden Alex and Camil asked me to play a game in padel. A new sport with walls. Smashing in a cage. This was a new flame for me. It started with serious training and gaining more knowledge about the new sport. It is important to always gain new insights to better understand the sport and understand the padel game. After training to become a coach, Alex got the hang of it all. He regularly plays for fun, participates in several tournaments and regularly gives training at MLTV’90 and La Playa. This new flame will not go out for a long time. He says with great enthusiasm: ” 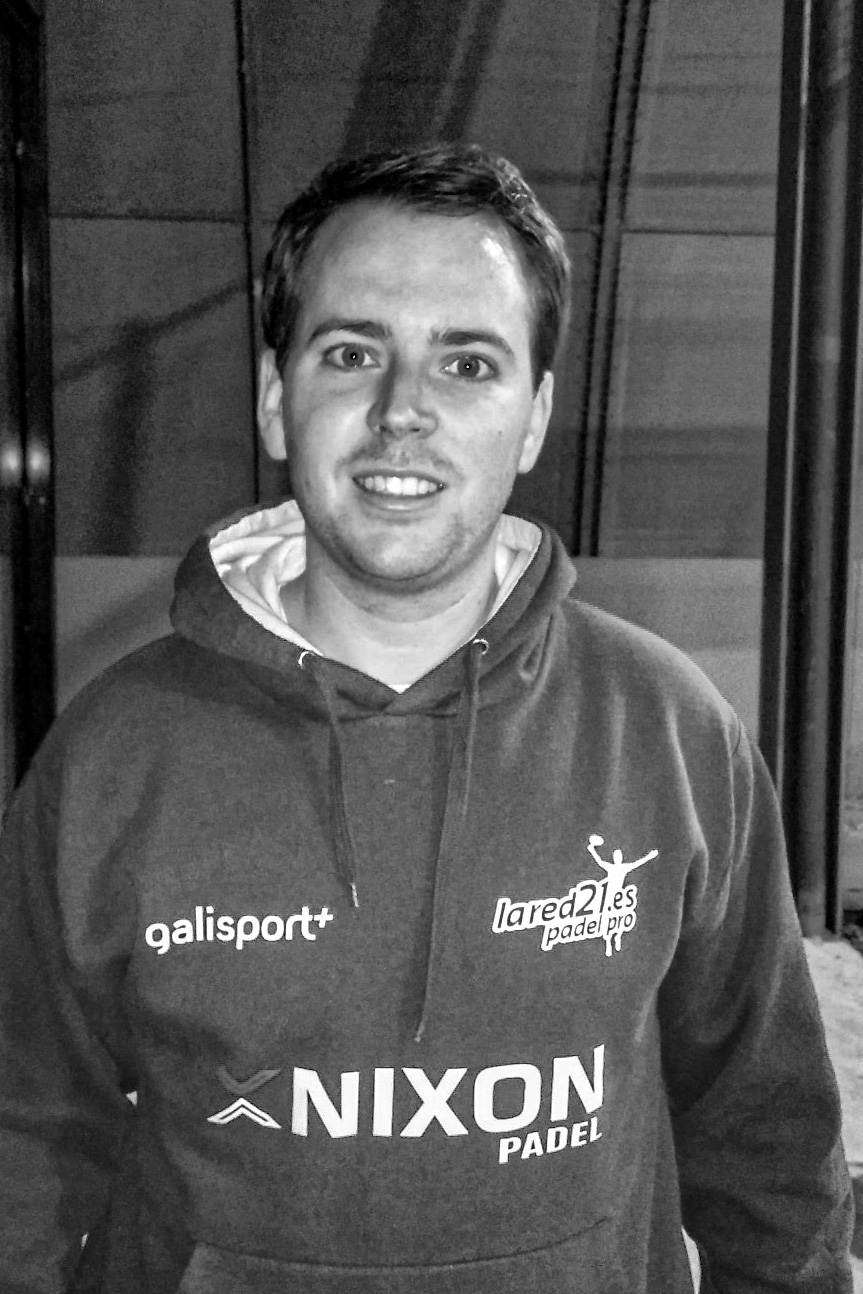 Alé, 26 years old, plays padel for more than 15 years now and he trained and worked with Javi Peña (WPT topcoach). He used to work for two clubs in Spain:
-Red XXI ( was one of the most important clubs in Spain). Seville
-Galisport.Seville.

I have been playing tournaments around Spain since I was 10 years old.
My best championship was in 2018, playing like a team ,we won Series Nationals, it is a well-known tournament.

He has played 6 padel championships in Spain.
When Ale was 16 years old he passed the title of padelcoach. Alé has good skills to teach on different levels and ages. He speaks Spanish and English. 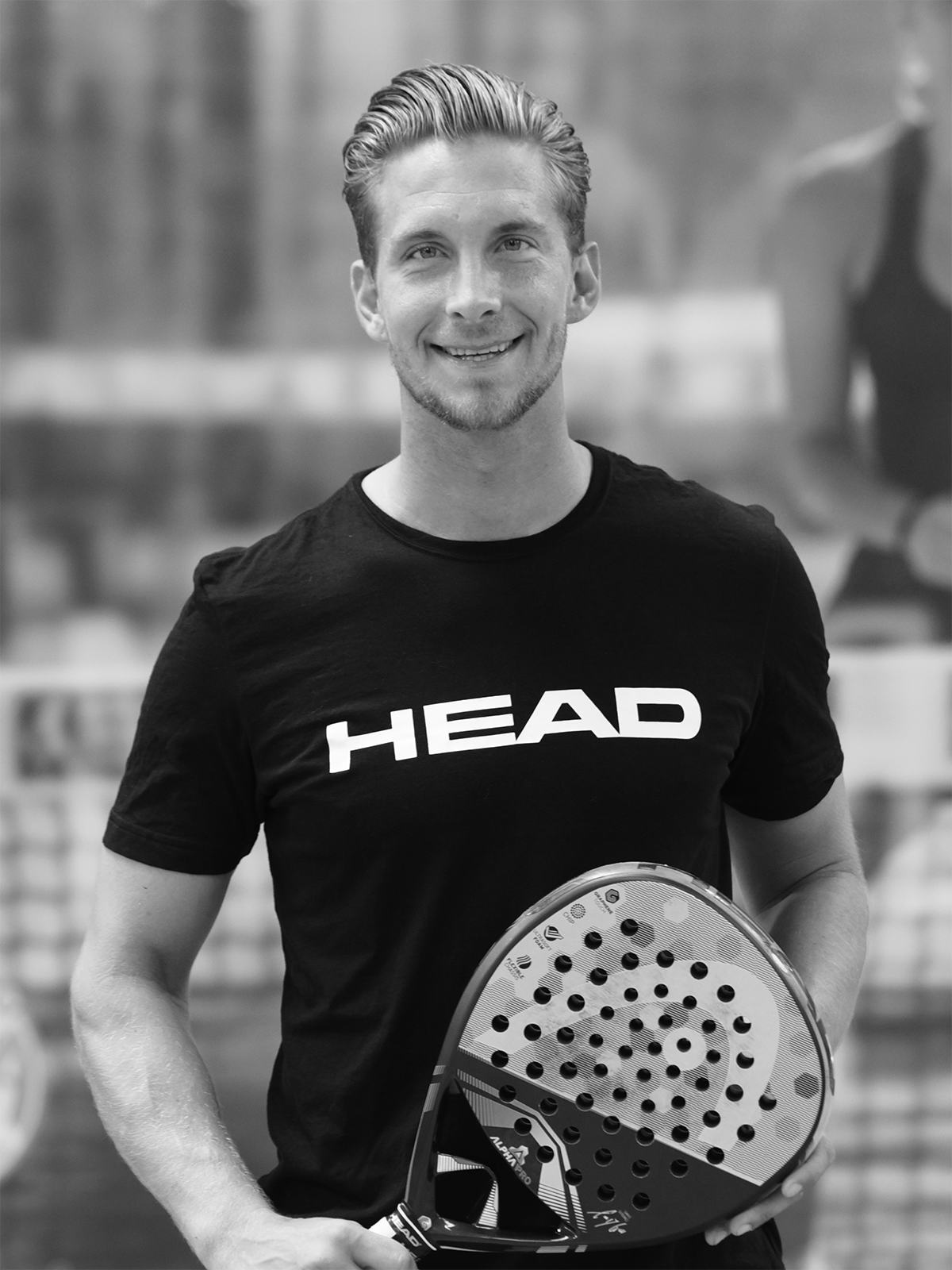 After 10 years of teaching tennis, Camil came into contact with padel. Camil played this fun game played 4 times a week from the first moment and shortly thereafter followed the training as a padel instructor via the NPB.
He was licensed in 2016 and fully involved in the Padel Academy, Camil provides padellessons at all levels. To achieve this, the padeltrainers are trained 8 times a year by Mauri Andrini, among others, and several trips to Spain took place in advance to gain knowledge from coaches who provide us with the right information with the right approach. We can now continue this knowledge when giving our training courses. Enough to read…. and go play quickly. Take part in the fastest growing sport in the world. See you on the PaDeLbAaN!

In 2008 she graduated at the Haagse Academie for physical education and after that she started as a gymteacher for kids. After 9 years of teaching she went to Spain for a year and got to know padel for the first time. She was addicted to this nice, social and fun game immediately. In February 2019 she finished the Bronze Course of Mauri Andrini who is the founder of Hello Padel Academy. After that she knew that her ambition was to teach kids to move more and better. Since September 2019 she started giving padellessons in a playful manner for kids from 6 years and older. The Padel Rebels. Do you know kids or do you have kids who are interested in getting to know this amazing sport? Just talk to me or send me an e-mail. You can always send an e-mail to Hello Padel Academy Holland for more information! 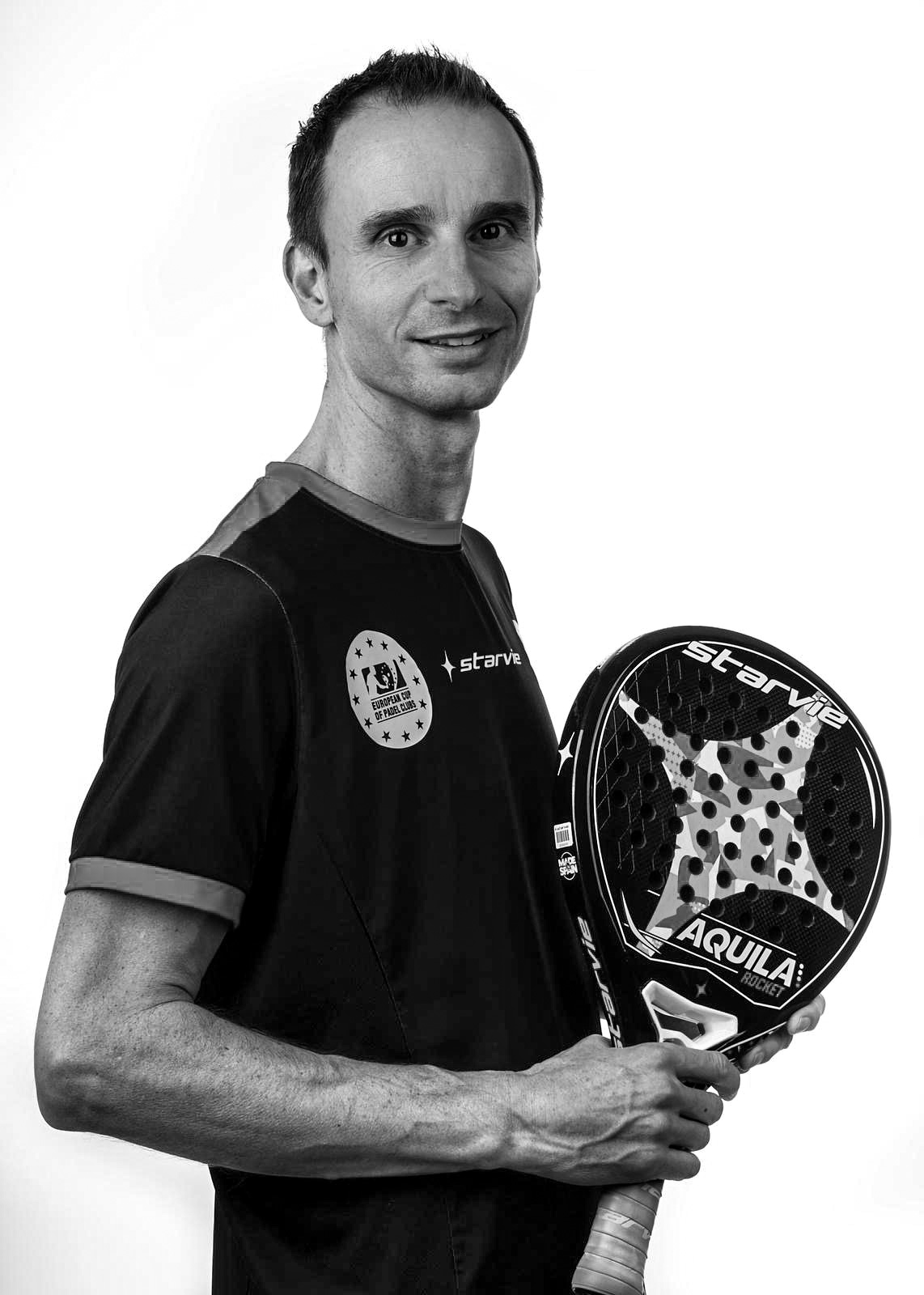 In 2015 Marcel and Alex founded Padel Academy. Marcel has been active as a padel player since 2013. In 2013 he became Dutch champion with Greg Cheng in Maaspoort. He is also the winner of many national & international padel tournaments (1st Dutchman who has won the FIP100 tournament, (Cologne 2013), 1st player on the WPT tour (Alicante 2014), main tournament world championships in Bilbao 2015, captain of the Dutch team for several years. at World Cup & European Championship for national teams Because of his experience and training internships at Maxi Castellote, Lucas Eslava, Pablo Ayma, he experienced how top trainers train and Marcel also owns La Playa (indoor padel center with 5 courts) and knows like no other how to start padel. 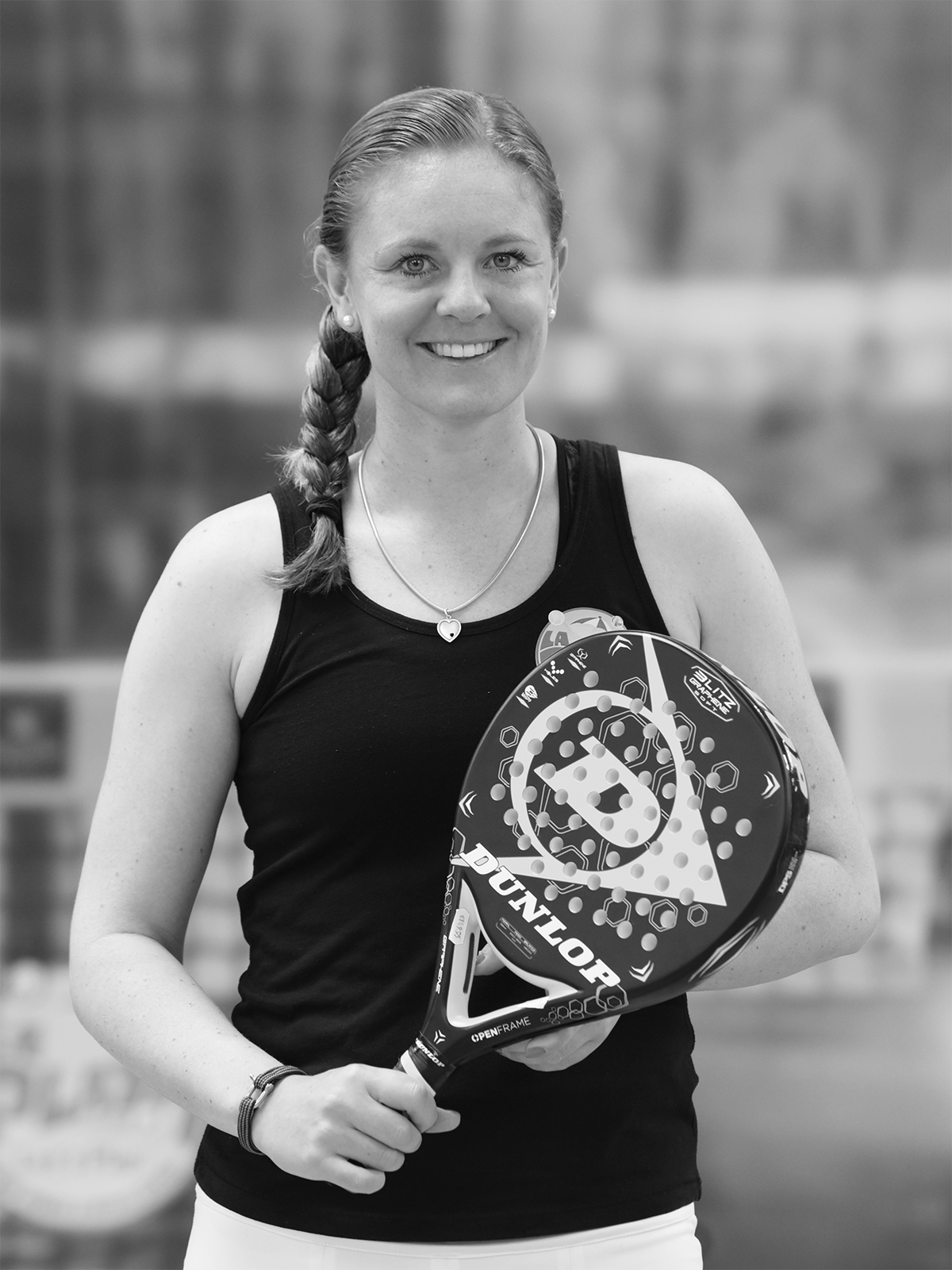 With the highest WTA ranking of 371 in the world (5 singles titles and 24 double titles) and 5 years of traveling around the world, quite a bit of tennis luggage and then in August 2015 she played with someone from the national men’s team. She turned out to be a natural talent, she was directly added to the national women’s team in which she was awarded the European Championship in November 2015 with a 4th place as a result. She has also worked with various top coaches and she has her official padel instructor certificate. Together with Milou Ettekoven, she is the best Dutch couple and will participate in the World Cup in Paraguay at the end of 2018. 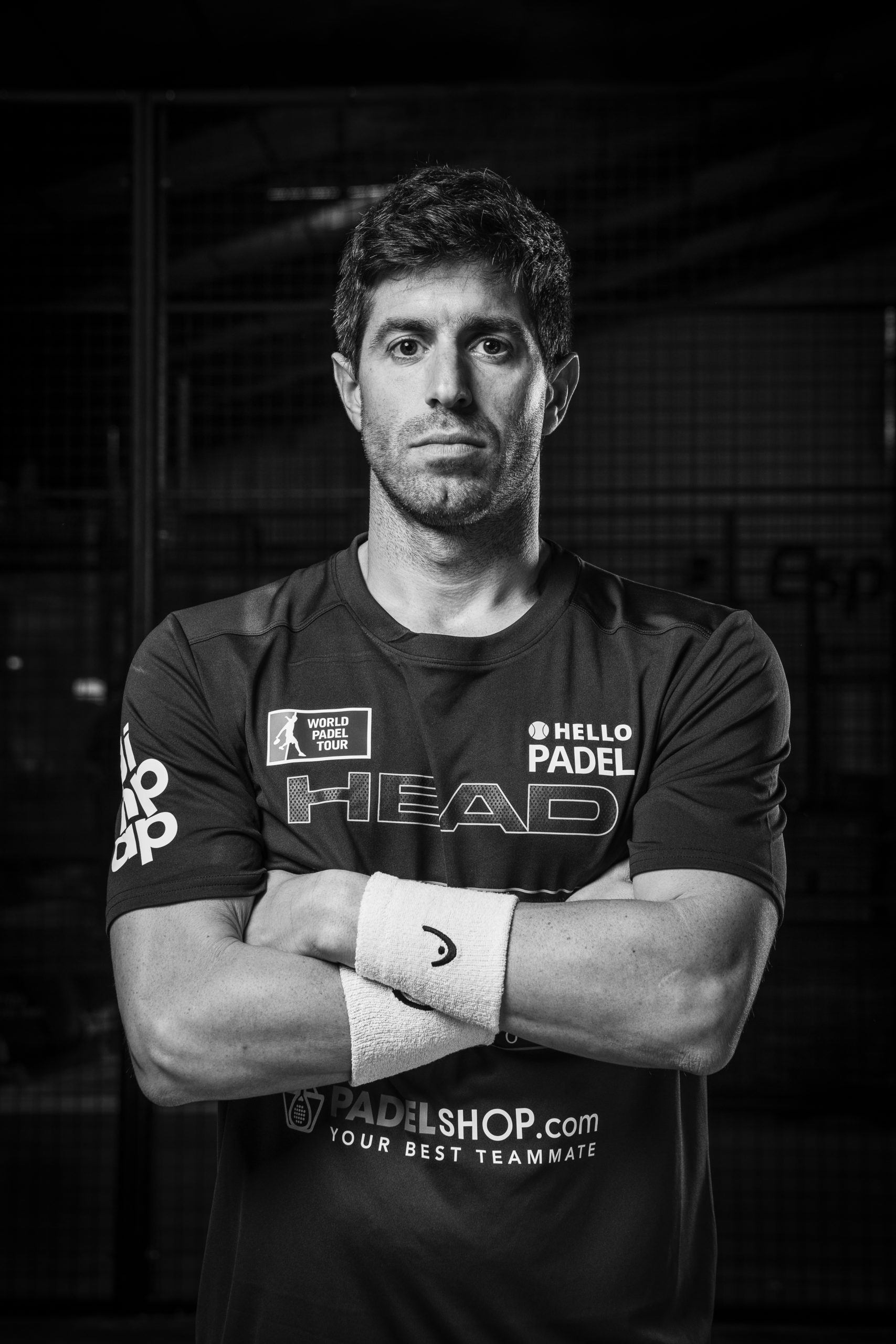 Mauri is still an active player and active in padel for over 25 years. The energetic and fun way of training combined with a didactic that seems to have no end, Mauri is a unique person. Since 2015 there has been very active contact between Alex and Mauri and since 2018 we have joined forces to provide the Benelux with the knowledge in padel that is unprecedented in Europe. In addition to a collaboration with the Padel Academy, Mauri is still active as a player on the World Padel Tour, daily accompanied by the global top of reports on Spanish television for the World Padel Tour and once you’ve seen him on the court. … well it remains Mauri, you are crazy! 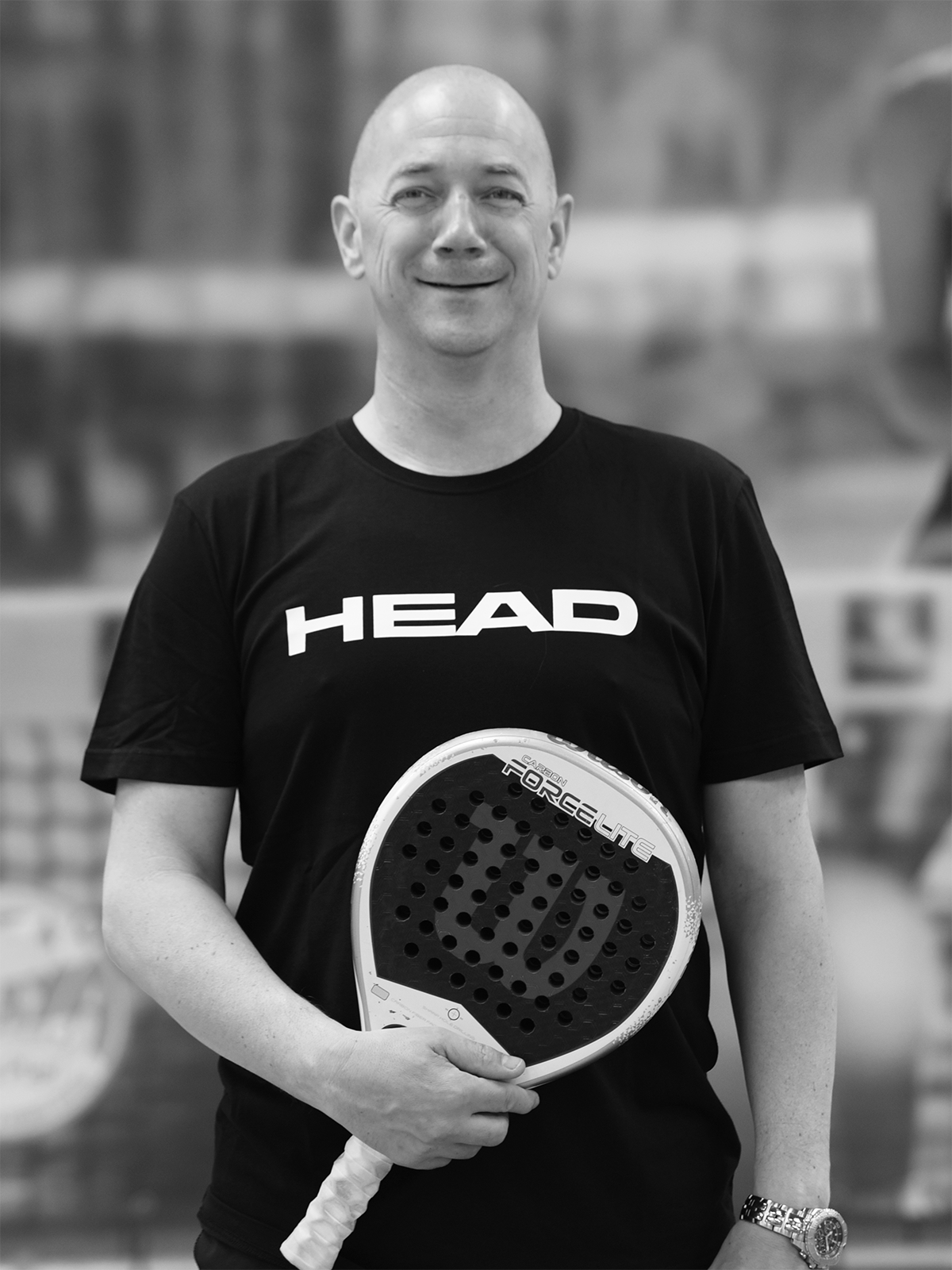 After 32 years on the tenniscourt René ended up on a padelcourt since November 2015. He played 3 times the following week and certified padel instructor within a year. Made many padeltrips to Spain and trained with big names such as Oriol Moyés (coach nr 15 WPT ladies), Mauri Andrini (current nr 138 of the world) and German Schaffer (15 years pro) and can even play against the current nr 10 Ale Gallan. In addition, he plays for the Netherlands Veterans Team 45+ and played and won international tournaments. Padel is a way of life! Padel is a pasion! René is a very enthusiastic ambassador for the sport and an enthusiastic trainer and coach! 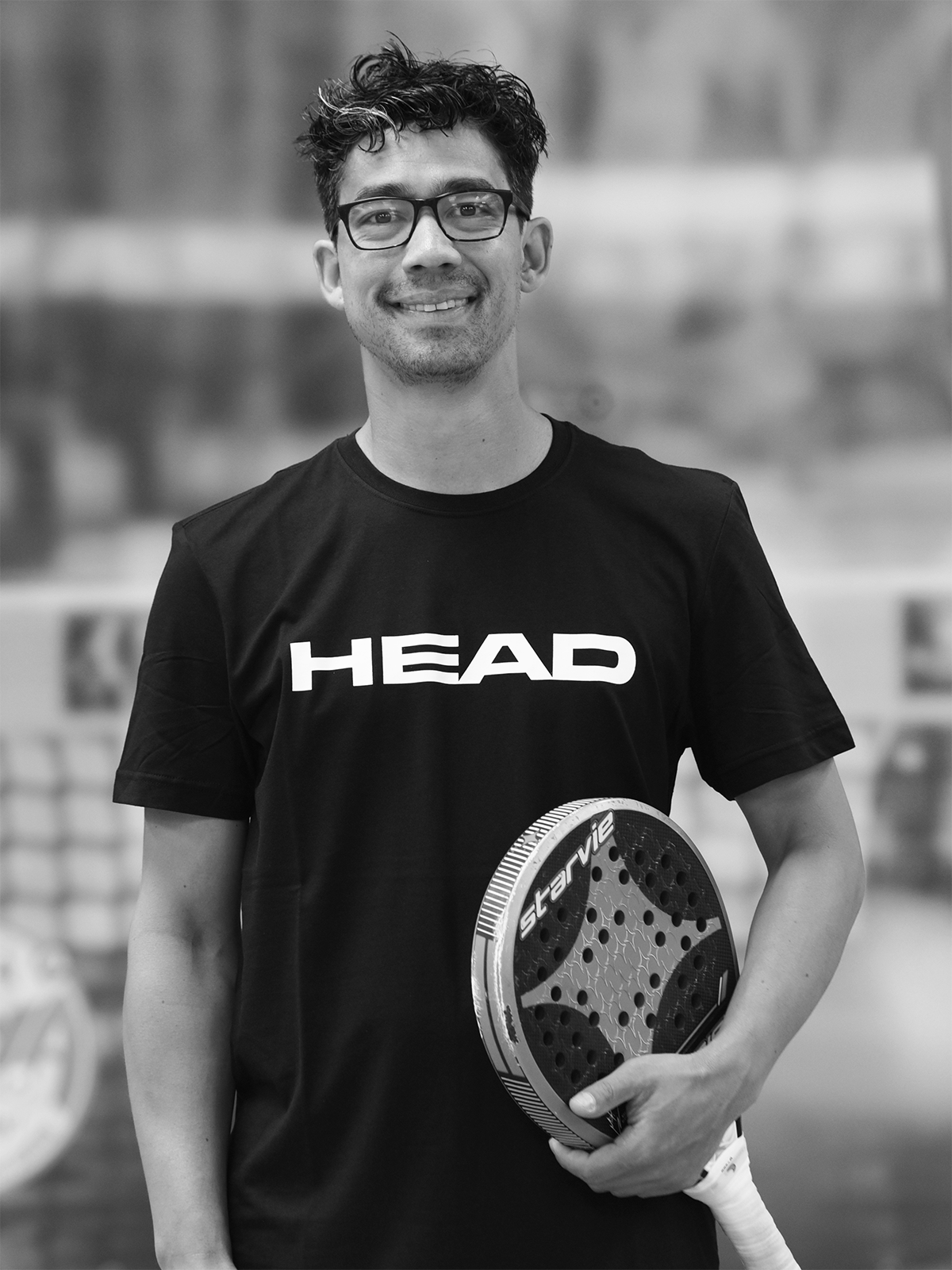 After 35 years, and in all levels of tennis my life changed in December 2015. That was the first time that I played padel with some friends. Very comfortable with each other in a fun way and have fun with other while playing a racketbalsport. From the very first ball I was hooked (read: addicted to).
The ease of use has been further strengthened by the use of walls. These elements where the reasons why I loved to improve my skills. Starting in January of 2016, I was on the court around 3 times a week. Everything had to make a way for padel!! In the meantime, in the country and abroad, many of the clinics and the training courses, given by Spanish and Argentine pros. I also have my certificate from the Mauri Andrini (www.hellopadel.com) and to my friends and family to confirm, I’m in February 2017, full-time working with a variety of responsibilities around here. To know Padelshop.com, clinics, demonstrations and the lessons for the Padel Academy. Padelshop.com =your best teammates =Try-before-you-buy –